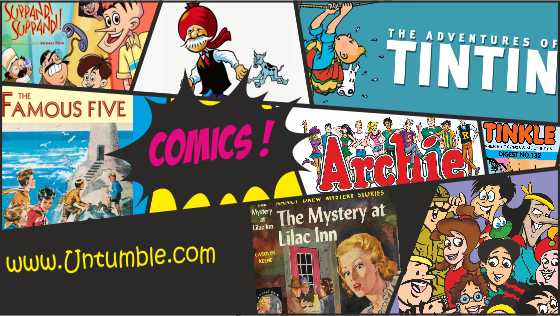 Comic books will bring in front of us thousands of memories of your childhood days, a time when we were completely oblivious of the outer world. They say childhood is the best part of any person’s life, too engrossed in your own little world of toy cars, dolls, stuffed toys, books, and comics.

As a parent, it is amazing to simply watch from a distance, what your child does in the time they spend by themselves. The look on their face when they discover something for the first time and their innocent curiosity about everything, transport you to the world that you left far behind, but which is still, an integral, unforgettable part of your life.

One such part of your childhood days is your books. When you were growing up, books and comics were one of the most cherished sources of entertainment. A privilege that today’s kids do not have. The enjoyment we got from them is incomparable to what kids get from their tabs and phones these days.

Among different types of books, comics, and magazines that we must have read, some of them simply stand out. We’ll talk about them, in this post.

Panchatantra was a delight for every growing up child, with beautiful stories that aren’t only great to read but also have a moral lesson in each one of them. The stories in this five-book series revolve mostly around the animals. Who could ever forget the stories of The Monkey and the Crocodile? Perhaps, you could recite the stories of Panchatantra to your kids to relive your old memories with them. They’ll fall in love with them, too!

For those of you who were born in the 1980s and 1990s, Tinkle was a monthly surprise that you eagerly waited for. A magazine packed with stories, comics, puzzles, and games. To this date, Tinkle publishes a magazine every month, and despite so many distractions affecting the kids these days, the fact that this magazine has a considerable amount of readers is absolutely incredible.

One comic that was popular all over the world and since a very long time is the Archie Comics. The adventures of the teenage boy Archie Andrews and his friends have been enthralling the younger population since the 1940s.

A chacha (uncle) that every Indian kid adored at the time; this was an intelligent old man who was called Chacha Chaudhary by everyone. The comic is set around the life of Chacha, Chachi (his wife), and an alien from Jupiter. This was a witty comic that kids thoroughly enjoyed and we know you’re one of them.

One of the most read comic books, Amar Chitra Katha, introduced young kids to the Indian history, mythology, and folk stories. They got a glimpse of what life in ancient India was through the meaningful stories. The first comic of Amar Chitr Katha was published in 1960s.

The Adventures of Tintin

Tintin is one of the oldest comic albums and one of the most popular ones in the Europe. Even in India, kids went crazy over this young reporter called Tintin. The Adventures of Tintin is an absolutely wonderful combination of humor with fantasy, mystery, thrillers, and science-fiction.

These were some of the all-time favorite comics and story books that kids of our generation grew up reading. There were quite a few novels that we, especially in our teenage years, found ourselves immersed in. Do you remember any of them? Let’s find out!

This collection of books involving the adventures of two brothers, Frank and Joe Hardy, was packed with fun, excitement, and suspense. There were in all 102 books in this collection, but kids never seemed to get enough of the Hardy boys’ stories.

This fictional novel revolved around the girl, Nancy Drew, who happened to solve mysterious murders and crimes, thanks to her curiosity, inquisitiveness, and daring attitude. She was one of the favorites among the teenagers, especially the teenage girls.

The group of 4 children and a dog become the famous five around the globe. Yes, we’re talking about the series of novels, The Famous Five that portrayed the adventurous school holidays of the 4 kids. The compelling stories involving crimes and treasure were equally exciting for children of all ages.

An amazing collection of 7 short stories and 15 full-length collections, the Secret Seven is the ultimate adventure book for every child. The stories are set during the school terms of 7 kids that belong to a secret society. The leader, Peter, his sister, and five of their friends are the secret seven who are basically child detectives solving crimes and mysteries happening around them. Every growing kid at that time, wished to be a part of the Secret Seven.

Hope you loved this brief rendezvous with your childhood. No matter how many years pass, every time you think about those times, the memories would be fresh as ever!

What To Do For Your Pet’s Birthday
10 Popular Hindi Cartoons for Kids!
Famous people and their childhood goals
Healthy baby food for your precious little one

One thought on “Rendezvous with your Childhood”