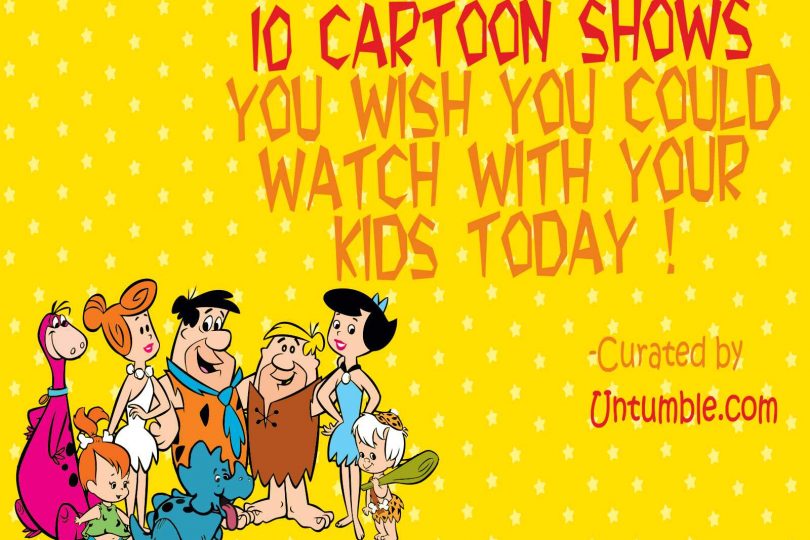 Have you ever wondered how your child’s life is so different from your own childhood days? Don’t you wish that they could get a glimpse of how you and your partner spent your childhood, away from the clutches of computers, play stations, and all the other gadgets that today’s kids are surrounded with.

Way before YouTube and internet revolutionized the way we watched our favorite shows and movies, in the 1980s and 1990s, children were completely satisfied with watching the shows that aired on television.
Thousands of memories come to life when you think about those days; fighting with your siblings over the TV remote control, rushing through your home work so you could finish it before your favorite show started, and lots moer.

Cascaded in those memories are some of the classic shows that you grew up watching. They were divergent in their plots ranging from stone-age men, science fiction, talking dog, etc. and still managed to capture every child’s interest. Let’s walk down the memory lane and live the reminiscences of our younger days, by taking a glimpse at some of the top shows of those times.

The Jetsons
Do you remember how popular The Jetson’s theme song was, at one time? This show was a huge hit among the kids in the 1980s. The show revolved around the space age-conceptualized life of the Jetson family along with their robot maid.

The Flintstones
This was one of the most well-known TV cartoons across the globe among people of all ages. Young kids, teenagers, parents, and grandparents enjoyed the life of two neighbors set in the stone-age period but who deal with the modern day problems. Yes, we are talking about The Flintstones.

Richie Rich
Not a lot of today’s kids know how wealthy the world’s richest boy could be and what he did all of his money. Richie Rich, popularly known as “the poor little rich boy” caught every kid’s imagination with his charitable nature and the willingness to help others.

Scooby-Doo
Remember a bunch of kids and a dog solving mysterious cases? Well, that’s Scooby-Doo for you. Four friends and Scooby-Doo – the talking dog,would solve cases involving mysterious supernatural beings almost by fluke and through various blunders they made.

The Addams Family
The Addams Family is all about the adventures of the closely-knit American family. They are the exact opposite of the ideal family and you must have enjoyed watching them deal with all the troubles they land up in, thanks to the good-natured Grandmama.

Dexter’s Laboratory
In this cartoon series revolves around Dexter, a boy genius and his secret laboratory.From his attempts to keep his sister DeeDee away from the lab to the rivalry that he shared with his genius neighbor Mandark, this show was one of the most popular shows to be aired on Cartoon Network.

Popeye
A lot of mothers were thankful for this cartoon which convinced the kids that eating spinach would make them strong and powerful. We’re pretty sure that’s how you started eating them, that is, if you ever did. In 2002, Popeye was ranked number 20 in its “50 Greatest Cartoon Characters of All Times” by TV Guide.

SWAT Kats: The Radical Squadron
The animated series SWAT Kats involves around the life of two ex-Enforcers who formed their own military vehicles to defend their city against the villains, the most notorious one of them being Dark Kat.

Talespin
Talespin was a take on the lives of the only two crew members of the air craft Sea Duck. Baloo, the bear from The Jungle Book is the pilot assisted by an orphaned boy who becomes his navigator. The series depicts the happy and challenging times of their lives.

Well, that brings us to the end of this wonderful journey of memories. If you are wondering whether your kids are going to love these shows as much as you did, why not find out yourself. Whatever their reaction is, we’re sure it would be worth inviting them to the world you grew up in!