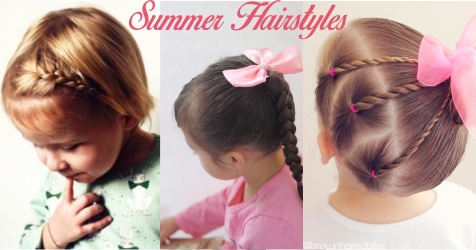 While your little one is having fun outdoors playing in the garden or trying to beat the heat while playing indoors, the last thing she wants is her hair to fall on her face or poke her on her neck. That would disturb her to no end. But, it’s so difficult to tie the hair of a little one, especially when they have short hair. Coming up with hairstyles which would be comfortable and stay intact for a long time is also quite challenging for most moms. If you’re one of them, you can relax as we bring to you some of the easiest yet super cool summer hairstyles for your little ones!

This hair style is especially suited for hair that’s too short to be tied into a pony tail and too long to be left open. The strands at the front just wouldn’t stop from falling on your kid’s face all the time. Partition the hair such that one side has more hair than the other. Just take the portion of the hair from the front on the side that has more hair, and start braiding it. Keep adding small sections of hair as you go braiding downwards and then secure it with an elastic band. That’s it!  This should put an end to the hair falling on her face and eyes. 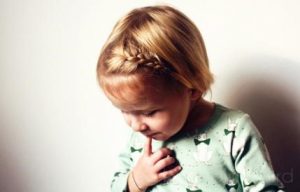 Do you remember the Hair bow style which was first introduced by Lady Gaga? Well, if you thought it looked cute, you can only imagine how cute your little girl would look in it. Start by tying a high pony. Then pull some length of the hair out of the pony from between the elastic bands so that the hair looks like a loop. Now split the loop into equal halves and push them on the two sides such that they look like the two parts of a bow. Take the remainder length of the hair, split them into two halves and wrap them around each loop or the bow. Secure the bows using bobby pins or hair pins. 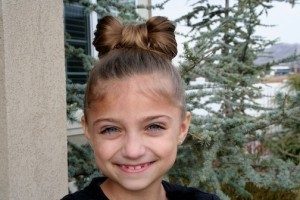 This one’s easy and classy at the same time. Tie 3-6 small pony tails for your little girl such that all of her hair is tied up. Now, take the pony on one end and start curling the hair so as to make a circular loop. Adjust the shape of the circle in such a way that there is enough space for the loops for as many pony tails you’ve tied.

Once your circular loop is ready, fix it with bobby pins and move to the next pony tail. Continue doing this for all the pony tails till the back of your child’s head looks like a crown of curls. Finish it off in style by fixing flower-designed bobby pins at the centre of each curled loop just as shown in the picture below. 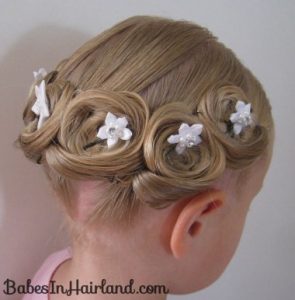 Make a centre partition, and further split the hair on the left hand side into three partitions. Tie pony tails and secure with elastic bands. Braid the hair from these three sections throughout the length of the hair. Now, make a bun taking the hair on the right hand side and remember to take the three braids along too. Use a ribbon to make the bun even more beautiful! 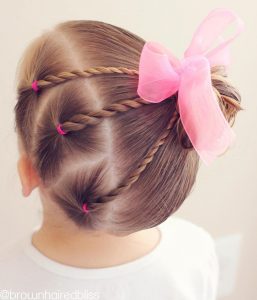 Two of the most common hairdos of all time, for girls – the pony tail and braid. Blend them together and you get a simple yet elegant hairstyle for your little one. Tie the hair into a high pony and secure with a large bow or a fancy elastic band. Now, braid the hair and stop anywhere you want. Wherever you stop, use a tiny elastic band to secure it. 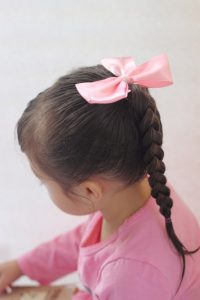 The Classic Side Pony

A side pony never goes out of style and our list of Summer hairstyles would never be complete without it. If the length of your girl’s hair is just about enough to tie a pony tail, then why not go for a side pony tail? It’s quite simple – just tie a pony tail and take it to one of the two sides. Secure the pony tail with a large attractive bow, preferably with a color that matches with their dress. And your little princess will be ready to rock any Summer event!